There also comes a point in the caregiving roller coaster where a trip to the emergency room becomes barely newsworthy.

A spike in fever, loss of bowel control, falls or dizziness that lands your patient and you in the ER for eight hours or so?

It’s all in a day’s caregiving work.

Does this quote sound familiar?  It makes me cringe a little in recognition.

I am noticing my tendency to swoop in and try to Get The Elder All Fixed and then get mad when other people don’t volunteer to help.  Because – well, how could they? I’ve identified and solved a problem before they even knew it existed.

I’m Mary AND Martha — hanging’ with Jesus AND making sure he gets his pills on time and his bloodwork done and his dinner in safe little portions.   We’ve been to the ER already and we’re all checked out and heading home … yes, all in a day’s caregiving work. And this is pushing me dangerously close to Martyr Territory.

This is St. Lucy. She reportedly was stabbed in the neck, burned alive and had her eyes plucked out, rather than give up her faith-based good works and marry a pagan suitor.

She’s a character I hate.  No one likes Martyrs.  They’re so self-denying and righteous and smug.  “No, you don’t need to polish my halo; I’ll just wear it like this.”

I did a story on one once – a hunger-striker who bugged me enough that I wrote about him.  He was Starving For a Cause.  All out there on a public sidewalk, making himself both unavoidable and supremely annoying.  No matter that the cause was noble … he just got on everyone’s nerves.

Being a martyr is little like being that hunger-striker — like telling everyone you yourself are hurting on behalf of someone else who is hurting, and why haven’t they stepped up to help too?  It’s a pattern I’ve been around (in certain *cough* Big Religions) and I loathe it.

So I don’t like to find myself doing the same thing but here we are. 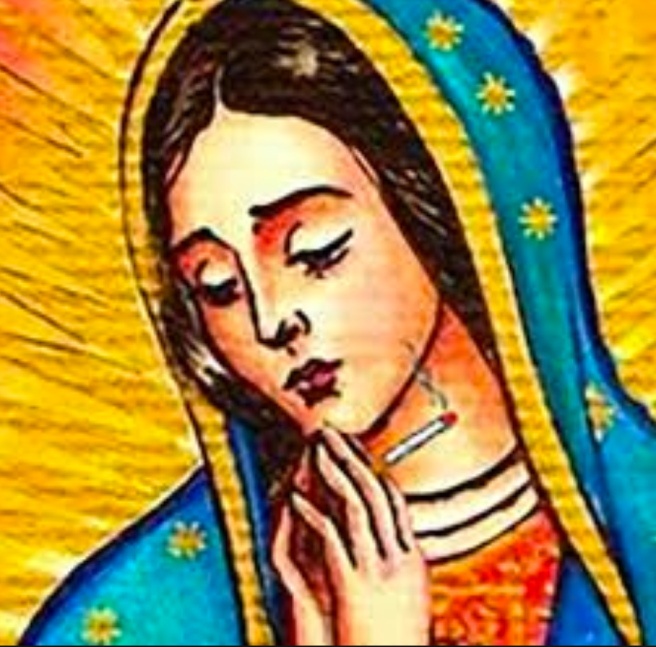 I’m using this blog to process Some Things about this Experience… and if it ever sounds like I’m trying to be thought of as saintly – well there’s a lot of pouting and simmering emotions and sometimes yelling in my car. A lot of teetering between being a Mary and a Martha – enjoying this time I have with the Elder but always with an eye on the next five things that have to happen to keep life steady.  When really I should just chill, and ask for some help before I need it.

(There is also the occasional late run to CVS so I can have a cigarette on the way.   It looks like the Blessed Virgin is having a smoke break, here, She definitely earned it.  I bet she had to sneak it, too.)

I’m realizing again, how mandatory the oxygen mask thing is – and how if I don’t get mine on first, get what I need, then some things won’t happen.  And if they don’t — well, fine.  Not fine-fine, but, we’ll just have to live with it fine.  And if folks around here pout, well, they can hire some more help.   Although, frankly, I’ll be the one who has to do the scheduling.  Ahem.

I haven’t read this book yet but it’s popped up under a couple of searches.   Here’s an article by the author. The quote at top of post – it’s from a good article about what to say to caregivers.  And if you like numbered lists of things you can fix about the situation, here’s one.

I'm a longtime producer for NPR. This site is part of a new project about becoming your parents' parent. You can see more about me at www.kitindc.com and @radiokitty View all posts by dementedthepodcast